8 Things You Need To Know About Sex When You Have An IUD
Seeing as the Mirena is becoming more popular than ever, one important question needs to be answered: How does having an IUD affect your sex life? 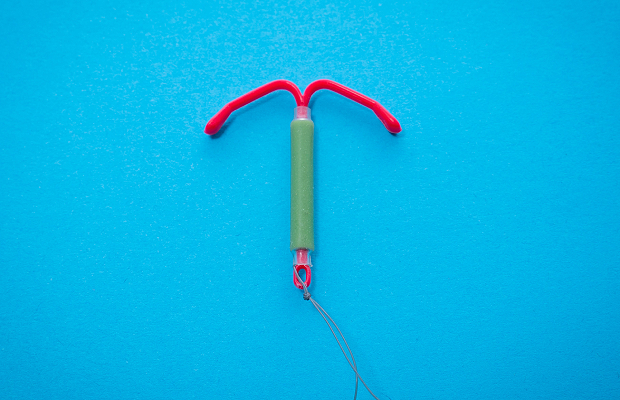 What’s not to love about intrauterine devices (IUDs)? Once that little T-shaped contraceptive is implanted in your uterus, you can finally stop worrying about forgetting to take your pill or wondering if the condom broke.

But, uh, will that little device affect your sex life in…other ways? (Like, will your partner be able to feel it?) Here’s what you need to know about having sex with an IUD.

“There are two types of IUDs: non-hormonal and hormonal, neither of which should have an impact on your sexual desire or how you feel during sex,” says Dr. Jaime Knopman, fertility expert at the New York outpost of the Colorado Center for Reproductive Medicine.

TBH, you probably won’t even know your IUD is there, says Knopman. “Since the IUD is placed in the uterine cavity, you can’t see it or feel it, so it shouldn’t have a negative impact on your sex life.”

2. But a hormonal IUD might affect your cycle—in a good way.

Dr. Alyssa Dweck, a gynaecologist in New York, says women who experience a heavy flow and cramping during their periods may have an “easier time of the month” thanks to the progestin in hormonal IUDs.

Hormonal IUDs will decrease bleeding and cramping during your period and could even stop both completely—so if you’re not a fan of period sex, this means more slots in your schedule for getting busy, says Dr. Amir Marashi, obstetric-gynaecologist and surgical director of the New York Center for Aesthetic Rejuvenation.

READ MORE: 12 Contraceptives You Should Think About Trying – Other Than The Pill

This is also great news for the 20 percent of women who experience heavy bleeding and cramping severe enough to interfere with daily activities, according to an American Family Physician report.

3. You can totally embrace spur-of-the-moment sex.

“Sex can be more spontaneous when you don’t need to remember to take a pill,” says Dr. Jess O’Reilly, resident sexologist for Astroglide. (Of course, you should still use a condom if you and your partner aren’t monogamous and/or aware of each other’s STD status.)

4. Your partner may feel the IUD strings.

But Dweck says it’s unlikely. As long as your IUD is properly in place, you can lean on the fact that they are designed to be super-thin and barely noticeable, even softening over time.

If you’re concerned about whether or not your IUD is in place, then there’s a DIY method for checking your strings. You can also check in with your gynae.

Some women experience bleeding during sex with an IUD—especially hormonal IUDs—though it isn’t common. “Hormonal IUDs thin out the endometrial lining, the inside of the uterus that sheds each month with a period,” says Dr. Sara Twogood, assistant professor of clinical obstetrics and gynaecology at the Keck School of Medicine in California. “If the lining is very thin, it may shed a bit during sex, which would cause bleeding.”

READ MORE: Your Complete Guide To Quitting Your Birth Control

You should always touch base with your doc to nail down the exact cause of your post-sex bleeding, especially if you’re in pain. It could be a sign that your IUD is out of place, which leaves you unprotected.

6. You’re highly unlikely to get pregnant.

Both hormonal and non-hormonal IUDs are more than 99 percent effective at preventing pregnancy, according to Planned Parenthood. Not bad, eh?

7. No position is off-limits.

“Every body is different, but if the IUD is in the proper position in the uterus, you shouldn’t feel your IUD during sex at all,” says Twogood. O’Reilly agrees, “Most women say their sex lives—and favourite positions—are unaffected.” Can I get an amen?

Yes, it’s possible for your IUD to slip out (docs call this expulsion), but it’s rare. “In the first year after getting an IUD, the expulsion rate is roughly 5 percent,” says Twogood. “But having sex wouldn’t increase or decrease this risk.”