Watch This Guy Explain To His Ex Why He Cheated On Her
If you were cheated on, you’re probably not going to want to discuss the whole thing with your ex. That’s why this video is blowing up on social media. 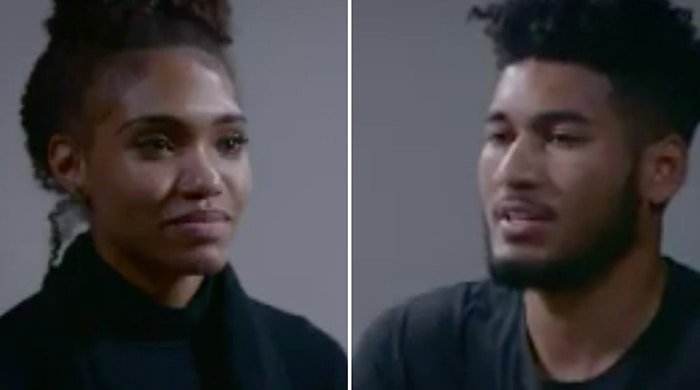 By Korin Miller
“You were my best friend.”
It’s pretty understandable that, if you were cheated on, you’re probably not going to want to sit down and discuss the whole thing in a calm, rational manner with your ex. That’s why one video showing just that is blowing up on social media.
In the video, shot by The Scene, former couple Kourtney and Leonard calmly talk about what went down when he cheated on her—repeatedly. “What did you do?” she asked. “I did everything,” he replied. When she pressed for more details, he admitted that he “had sex with other girls.”
Here’s the full video:

The couple then goes on to tell the story of their relationship. At one point, Leonard says, “I would say that you were my best friend.” “Yeah, me too,” Kourtney says. She admitted that she went through his phone and would find suspicious photos and texts from other girls. One time, she actually caught him in the act with another girl, and he told her to leave. “I went back to my room and I just cried,” she recalled, tearing up.
Leonard said that things eventually got to a point where he felt that she didn’t trust him (apparently with good reason…). “Why didn’t you just leave?” he asked. “I don’t know—I think I was just stupid,” Kourtney said. She also asked how many times he cheated on her and he said he didn’t know: “I wasn’t counting.”
READ MORE: I Cheated – Should I Tell My Partner?
Eventually, Leonard says his cheating had more to do with him not being able to commit, apologised for hurting her, and says he hopes in the future that they can remain “good friends and I can see you grow into the woman that you’re becoming.”
As you might have guessed, people had a range of reactions on Twitter:

@JD_lwig @SCENE this was so damn difficult to watch. Does he not realise how much damage he's caused?

his whole demeanour… it's like he almost wants to say "I was here to teach you a lesson. You're welcome!" I want to chop him

Moving in with a new partner? Here are the 13 Emotional Stages of sharing a bathroom with a guy, plus how to cohabit happily.
This article was originally published on www.womenshealthmag.com