WH Tries The Hashtag Push-Up
VIDEO: After spotting the hashtag push-up on social media, the WH team decided to give it a try - with hilarious results! Can your squad do better? 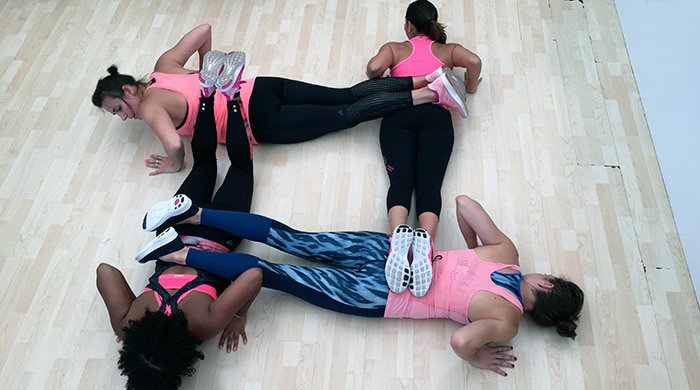 After spotting the hashtag push-up on social media, the WH team decided to give it a try – with hilarious results!

If you’re a regular on this page, you’ll know that the Women’s Health team is a sucker for a fitness challenge. So when we saw Rush SA trampoline park posted this video of their staff doing a hashtag push-up we were intrigued to say the least.

Turns out, this challenge is much harder than it looks! We totally underestimated the downforce that you exert with your legs while doing a push-up. You need four people who not only have a strong push-up game, but super strong core muscles as well – and preferably who are also light.

Want To Try It?

Be sure to keep your hands under your shoulders and your core super tight. Make it easier by positioning your legs over each other’s shoulders rather than waists – it will make it easier to push up, plus spare your lower back. Another tip – do a negative push-up: start in high plank and lower down rather than starting from the ground and pushing up. Still too hard? Do a hashtag plank instead: Get into high plank and see how long you can hold it.

Looking for more on push-ups? Here are five signs you’re doing a push-up wrong, plus try this simple tweak if you want to pimp your push-up and take it to the next level.