Are Flings Really The New ‘Relationship’?
With all the dating apps out there, are stable relationships out and flings in? We find out... 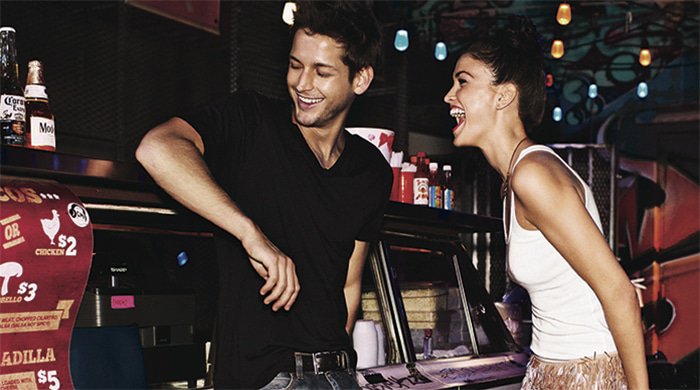 By Kirsty Carpenter; Photography by Tom Schirmacher
With all the dating apps out there, are relationships now as cool as Crocs? We find out…
Amy Schumer in Trainwreck. Katy Perry in Last Friday Night (TGIF). Er, pretty much everyone in Jersey Shore. All experts in hooking up. And it’s not just a pop-culture phenomenon – there are self-help books on the subject abound, giving you a girls’ guide to casual sex and, basically, how to have as much fun as possible.
In the journal Review of General Psychology, a sample of undergraduate students found that both men and women had nearly double the number of hookups compared to first dates. So what gives?
According to the Canadian Journal of Human Sexuality, social developments in Western culture, such as increased permissiveness towards sex before marriage, contraceptive use and living together before marriage have caused what researchers call “suspended adolescence” or “emergent adulthood”, defining the period between 18 to 25 years. These factors have led to delayed marriages and a longer chance to experiment and have fun.
And it can be just that – a lot of fun. But when your friends start settling down in relationships, do flings become a little bit boring? Or are they more of a choice?
We break down the reasons some women prefer to have flings – and whether it’s the healthier choice.
READ MORE: These are the top 2 reasons why millennials cheat on their partners

“You get all the good stuff (mad attraction, wild excitement), without the complication (angst-ridden talks about where things are going or whether you’re still on Tinder) and none of the unsexy life stuff, like whose turn it is to empty the dishwasher,” says 37-year-old Lee-Ann Spurdens. “As long as you truly don’t want more, a fling can be a wonderful thing. So can a relationship… But it needs to be worth the compromise. Until then, flings have their place – and can make for surprisingly loving connections.”
What the expert says: Lee-Ann hits the nail on the head: there are, inevitably, going to be feelings involved – from your side or theirs (the movie Friends with Benefits is a clear example). Sure, it may not start out that way, but these unanticipated feelings are just that: unanticipated. “Initially, we try to protect ourselves with the mantra, ‘It’s nothing more than sex or a casual hook-up,’” says Joburg-based clinical psychologist Liane Lurie. “You may have also been hurt so much previously that this seems simpler. However, somewhere inside, there’s a hope that it will evolve into something more or that your hook-up will begin to see you more than just an object as you crave intimacy and closeness.” And therein lies the problem. If you’re okay with the idea that you may get hurt, then fling ahead, but take a step back if you’ve had your heart broken one too many times.
READ MORE: Are you addicted to dating? Here’s how to find out…

You’re focused on your career

You’ve heard it before: woman gets great job; woman is set on making a success of herself; woman ends up shrivelled and alone. Agh, shame! Okay, not really, but you get the picture. The scenario sounds familiar to Sarah Nkosi, 34, whose demanding PR job means she has little time to date. “I barely have time to meet my girlfriends for drinks – how am I meant to have a relationship?” she says.
What the expert says: “For some, the idea of balancing career demands and a relationship may seem daunting,” says Lurie. “They may also not want the added complication. However, multiple ‘meaningless’ hook-ups can often leave you feeling empty, without something tangible and stable.” But Sarah’s okay with it. “I’m having fun. Even though most of my friends are in serious relationships, in my high-pressured job, I need to let off steam and hooking up with guys is the best way for me to do it.” This is understandable, yet Lurie warns that while sex may stimulate the endorphins, the feeling is often short lived. “Long-term, consistent support ultimately serves as a protective factor when it comes to our well-being,” she says.

As a single mom and sole breadwinner, Nonkuzo Mbuzi’s* time is limited. “The constant rush from home to work to gym to the shops to social gatherings and back again can make adulting feel like a lot of hard work,” says the 38-year-old. “Flings, on the other hand, offer a liberating break from real life: the ultimate escape. The only requirement is that you enjoy spending time with him and that you find him sexy. Hopefully very sexy.”
What the expert says: Work! Friends! CrossFit! Holidays! Where’s a relationship meant to fit in? Well, it doesn’t really have to, says Lurie, stating that you can rather invest that time in yourself. “This can be an extremely healthy and exhilarating time, so use it to its maximum benefit as opposed to one day being resentful that a partner held you back from exploring and truly experiencing life,” she adds.
READ MORE: This is your biggest sex struggle, according to your star sign.

When you’re left behind

Whether you’ve chosen flings over relationships, or life’s just happened that way, what happens when you’re pushing 40 or 50 and something switches? That’s what happened to Marlie Coetzee* (37). “Flings are shiny things when you’re in your twenties – and they certainly don’t lose their lustre for the next decade or so – but there comes a day when you wake up and change your mind,” she says. “It’s in this moment that a relationship and all it offers (security, shared bond, kids, someone to just be there for a hug after a long, hard day) suddenly makes sense. And you know what? It’s too late. All those true-love, starry-eyed offers you casually waved off in the interests of fun, variety and excitement when you were young and fresh and plump and lovely – denied. All the good ones are taken. Even the bad ones want the 25-year-old you.”
What the expert says: So what’s next? Are you destined to spend your nights rearranging your bookshelves (again), burying your regrets with a liquid diet, waiting for your cats to eat you? No way! “If you’re serious about meeting someone, put it out there, loudly and clearly. Engaging in situations conducive to meeting others is important,” says Lurie. “You’ve had your fun, now’s your time to share it seriously with someone else.”
*Name has been changed.
READ MORE: “I date sugar daddies. And this is why I love it.”

The ABCs of Hooking Up