5 Exercises To AVOID If You Suffer From Back Pain
It may come as some surprise that some of the more common exercises are actually some of the biggest back pain culprits. Avoid these at all costs... 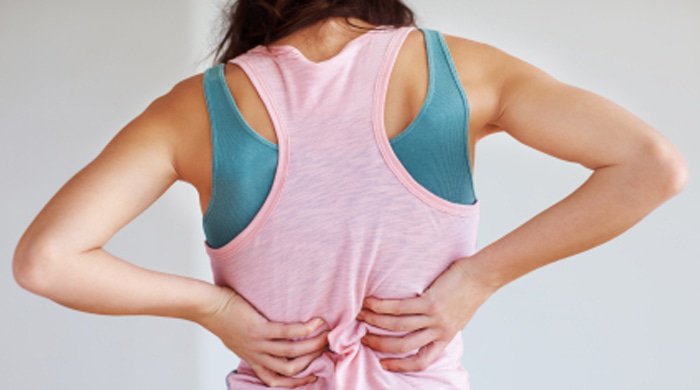 You could be making it a lot worse…

A majority of adults experience back pain at some point in their life, and, for the most part they’re totally unaware that they are exacerbating their back pain by making bad exercise choices.

When you’ve got back pain the last thing you should be doing is rounding the spine (and reversing the natural lumbar curve). The moment we bend forward or hunch the back, whether sitting or standing, the load on the disc space increases dramatically, putting a huge amount of pressure on the lower lumbar vertebra.

It may come as some surprise that some of the more common exercises are actually some of the biggest culprits!

1. Toe-touching and twisting the spine

While sit-ups used to be a favourite for working the belly this move only works 20 percent of your abdominal muscles and puts a huge strain on the back. Pulling on the neck while crunching hurts the upper back and your lower back gets hit when as your hip flexors pull on the spine to raise your upper body off the ground. So instead of opting for a gruelling sit up routine, consider planking – which works your entire body while really focusing on your core repetitive sit ups put pressure on the spine.

READ MORE: This 9-Minute Yoga Routine Will Help You Ditch Lower Back Pain

Another favourite in the gym, but again a common exercise that can stress the lower lumbar and Sacro iliac joints. For most people, it’s nearly impossible to keep the back from arching as both legs raise and lower. When that happens, the back hyper-extends, placing stress on the spine and increasing the risk of injury. If you’re set on doing double leg raises, try placing your hands underneath your lower back for added support, moving in a slow, controlled way. If you have any back pain – simply avoid this exercise.

4. Spinning with a rounded back

Mountain biking and cycling with an upright posture honours the correct lumbar curve and doesn’t create undue stress on the back, however leaning forward on a spinning bike or doing long distance road cycling may put stress on the lower spine and exacerbate tension in the area. Commonly cyclist who complain of numbing fingers and numb toes while riding are actually suffering from the effects of locked up muscles which have tightened in response to the body’s rounded posture.

Running is a high-impact exercise. The faster you run, the harder your feet hit the ground and this repetitive jarring is very hard on the joints and the spine. Studies such as the one published in the September 1986 issue of the British Journal of Sports Medicine found that the spine shrank by several millimeters after a 6km run, and the shrinkage was directly proportionate to running speed. Although the relationship of spinal shrinkage to spine pain isn’t fully known, those results show how much stress running can put on the spine. If you experience chronic back pain, running may not be an option.

How To Manage Back Pain

While doing exercise, remember to listen to your body. Pain in the warning signal that you are starting to push yourself beyond your individual limit into “overload”. When you feel pain, stop or adapt the activity – don’t try ignore the pain or “work through it” or supress it with pain killers. In the long run a little rest often goes a long way in bouncing back stronger.

READ MORE: 6 Running Pains And How To Treat Them So They Never Come Back

Simon, an engineer aged thirty-five, had pain radiating from his lower back into his groin, and the pain in his right leg was so severe that at times he could not stand on it. He’d had been forced to give up his sports, running and golf. An MRI scan showed a prolapsed disc in his lumbar spine, and the specialist advised disc surgery. He was strongly opposed to having an operation, and decided to try body stress release. His buttock, thigh and calf muscles were extremely tense, as well as his diaphragm, and his back was very sensitive to touch.

After the first session, he felt some hope, as the pain started to come and go, and he was aware of tingling in both feet. But he felt worse after the second, with the sensation of electric currents running up and down his right leg. The practitioner assured him that this was a positive sign, as nerve communication was restoring in the process of unlocking the muscular stress.

A few sessions later and he was completely pain-free. However, his lower-back muscles felt tight, and he was given an exercise to strengthen his abdominal muscles. Soon he was able to play golf again and began to understand the importance of regular body stress release for health maintenance so he kept on seeing his practitioner every six weeks. Four years later Simon had another MRI scan, and the surgeon was astonished to see no sign of disc prolapse!

This case study demonstrates that, if the stored tension around a prolapsed disc is released, the compression on the disc space is relieved. In many cases this allows the pressure on the jelly-like core to be redistributed towards normal thereby allowing the bulge of the cartilage to reduce.

For further case studies on neck pain, back pain, sciatica, headaches, or information on how body stress release can assist with muscular pain click here www.unlockingtension.co.za

These are the 3 most important stretches to prevent injury. Plus: The 4 tightest muscles – and exactly how to stretch them.