“I Gave Myself Six Weeks To Master A Chin-Up — Here’s What Happened”
Move over, elbow plank... pull-ups and chin-ups are now the holy grail of fitness for gym girls. This plan promises to get you above the bar in six weeks! 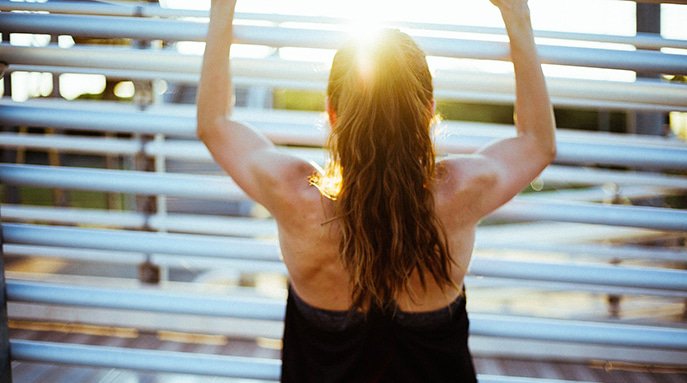 Move over, elbow plank… the pull-up is now the holy grail of fitness (and Insta pics) for gym girls. This plan promises to get you there in just six weeks!

It’s our birthday month! So we’re throwing back to some of the awesome workouts we’ve done over the years. Every week in November, we’ll be bringing you a piece of sage advice from the last eight years of WH. First up: That time we all learnt to do chin-ups.

Chin-Up vs Pull-Up: What’s The Diff?

Ok, so first things first: Pull-ups and chin-ups…same-same right? Actually, more like same-same, but different. A pull-up is hauling yourself up above the bar with an overhand grip. You’re mainly using your back muscles to achieve this and, because men typically have more upper-body strength than women, it’s typically harder for us than for the guys. So many eye rolls. The chin-up also involves pulling yourself up above a bar from a dead hang, but this time you’re using an underhand grip, so you can get your biceps in on the action to help. While the chin-up is easier, it’s still pretty damn hard. So when the WH team got our grubby gym gloves on this programme by trainer Tony Gentilcore, which promised to get you there in just six weeks, we had to try it.

READ MORE: This is what you need to know about doing yoga to lose weight.

The programme consists of four exercises that will help you practise and master proper technique, as well as build upper-body vertical pulling strength. These moves will also help improve your grip strength and exercise tolerance – meaning it will feel easier to hold on to the bar.

DO IT: During the two phases of this plan, alternate between the sets of exercises, doing them a total of three times each week. (So the first week is 1-2-1, the second week is 2-1-2 and so on.) NB: add the move to the beginning of your regularly scheduled workout – it’s crucial to do it when your body is fresh and at its strongest.

You’ll need: A bar; a TRX cable; a resistance band

READ MORE: “I tried a hairstyle from my ‘hell no’ list. Here’s what happened.“

I was one of five WH staffers who agreed to take on the challenge. At the start, none of us could do even one chin-up. Not even close. I’d always wanted to be able to do pull myself up on a bar. But the idea that I’d be able to go from zero to success in just six weeks seemed ludicrous. The idea of failing in front of the whole WH audience terrified me even more, though, so I committed myself to training hard.

The moves are straightforward but they’re not easy – big strength moves take it out of you and my muscles were sore all the time. To supplement the programme, I would spend time every day just hanging from the bar for as long as I could hold on. It’s a ridiculously simple thing to do, but it does wonders for building your grip strength, which is essential for chin-ups and pull-ups.

When you don’t yet have the strength to do them, it’s easy to hurt yourself by trying too hard. Every few days I would try to do a chin-up. Inevitably I would end up hunching my shoulders and pulling with my neck. My physio and I became really tight really quickly. The blind spot in my car, not so much. To avoid this, shrug your shoulders back and down as you step up to the bar. Then keep them down. If you feel them hunching up and your neck pulling tight, stop immediately.

Sneaky Hack: Use Your Whole Body

While it seems like just an upper-body move, you actually need to use your whole body to get above the bar. Brace your core as hard as you can and squeeze your glutes tight. I first felt this all come together when I did my first band-assisted chin-up. I couldn’t believe the feeling of my whole body working in unison to get me above the bar. I still wasn’t any closer to an unassisted chin-up though, and time was running out!

READ MORE: Should you really be eating raw eggs?

Sneaky Hack: Use Your Legs

The very first chin-up I ever did was caught on camera in the video below! It was D-Day and as I stepped up to the bar, with everyone watching and the camera rolling, I didn’t think I’d be able to do it. I had butterflies in my tummy. My heart was racing. I gripped the bar, feeling the familiar rough metal in my hands. I stepped off the step. It felt like stepping off a bridge. I pulled. My body rose. And kept rising. My colleagues gasped in anxious anticipation. Al-most-there…I kicked my legs. My nose crested the bar, then my chin. It was a childhood dream, come true. A moment of pure, unfiltered disbelief, relief and triumph all in one. Adrenaline definitely played a role in getting me above the bar, but so did that little kick. Your first chin-up doesn’t have to be pretty!

Watch how the team did in their chin-up challenge…

Where Are They Now?

After the challenge, I kept practising chin-ups for a while, but they were very hit and miss and I, must admit, I eventually stopped practising and went back to square one. But the fact I’d lost a skill I had worked so hard to acquire was devastating so about a year later I started training again. This time I kept it up and I can now not only do a chin-up, but a couple of pull-ups as well! Joy kept at it and nailed her chin-up shortly after the challenge. These days she’s living her best life in Taiwan. Unknown to us at the time, Michelle found out she was pregnant during the challenge! She’s now the proud mom of twin girls – and she can do a chin-up! Tlhoki swapped chin-up bars for dancing shoes and is learning to tap.

LOOKING FOR MORE? A whole bunch of women are getting naked and doing yoga on Insta. Here’s why…