10 Things You Should Know Before Running Your First Marathon
The Two Oceans has been dubbed the world’s most beautiful marathon, but what’s not beautiful? Tapering. Tapering sucks. It’s the worst. 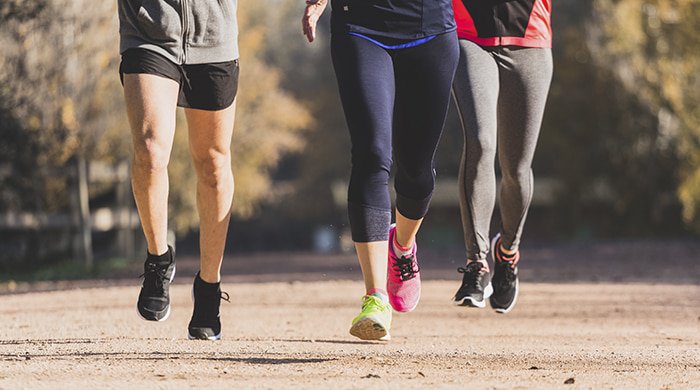 It’s been dubbed the world’s most beautiful marathon, but what’s not beautiful? Tapering. Tapering sucks. It’s the worst. And I’m feeling it hard today, a few days before my first Old Mutual Two Oceans Marathon 56km race. So, while I’m feeling sinusy, antsy and emotional, I thought I’d reflect on my journey — how I got to this point and things that really helped me along the way.

1 You need to train – properly!

It’s also really beneficial to throw in some strength training and yoga to keep those tight hammies in check. But, mainly, you need to get hours and distance in your legs over time to build endurance. Also, doing a 25km training run alone sucks (even with good music!). That leads me to my second point.

READ MORE: This Easy Cardio Swap Will Help You Train For A Half Marathon

2 You should join a running club

I belong to ATC in Cape Town. The best part about being in a running club isn’t the free socks every time you get a PB, it’s about the support. You train together, you get a coach who drives you hard at track, who gives you a programme and tips. Plus, when you start losing energy at 33km during a marathon, a ‘stranger’ will pass you and say “Go AAC!”. And you get a boost of energy!

Plus, once you’ve crossed the finish line after a gruelling 42km in the wind (Hi, Peninsula marathon!) you have a gazebo stocked with Powerade, coke, peanuts and all the other salty treats you’re craving. Running is all about community.

READ MORE: Exactly What Should You Eat Before And After A Run

3 You have to learn to pace yourself

When I was running half marathons I didn’t know a thing about pacing. My race-day plan used to go a little something like this: take the first 5km a chilled, pick it up until 15km, then push pretty hard. When I started training for my first marathon I had to teach myself to run consistently at the same speed for, let’s say, 28km. That sh*t is hard initially, but crucial for long-distance running.

When I get excited or nervous, my body wants to push faster and I have to hold myself back. I started relying hard on my running watch. I use the TomTom Spark with a built in heart-rate monitor (essential for you to see when your body is working hard/you’re tired/you may be coming down with flu). And then…

READ MORE: Here’s Why This Marathon Runner Decided To Share Her Cellulite Photos

My watch syncs via Bluetooth to my phone and displays my pacing, route elevation, heart rate etc on the TomTom app, which is handy, but, like I’ve said before, I like community. So my runs also sync to Strava, where I have an online family of runners who give me kudos for my misty morning tempo runs and comment on my elevation (yeah, that was Kloof Nek!).

It also helps you to keep track of all the kms you’ve put in over the year and how you’ve improved with personal records on particular routes. Plus it picks up who you’re running with, who’s running near you and you can connect with runners around the world.

When I ran my first marathon, I was only allowed to start pushing after 28km. Your first 21km (ie, every other race I’d ever done), became the warm-up. That in itself was a mindf*ck. I used to think 21km was a ‘big distance’. It’s not. It’s a warm-up. Now I’m trying to wrap my head around the concept of running for six hours. Of conquering massive hills and then still having to push for a further 10km to reach the finish line, when I’ll surely be exhausted, dehydrated, depleted AND it’ll be mid-day when the sun will be beating down on me.

There are two things that have helped calm my anxiety around this. One: this race is nothing. If you want to see real endurance, watch The Barkley Marathons documentary. Now that’s hard! Two: I’m going to have someone with me the whole way.

READ MORE: These Runners’ Act Of Kindness Will Melt Even The Coldest Heart

6 It’s easier with a partner

Having one guaranteed tjommie consistently by your side makes a massive difference. I’ve relied hard on my training partner over the past six months. He creates a running programme for us each week. We rely on each other to kick each others’ butts out of bed (Me: “But it’s raining!” Him: “But what if it rains on race day? You have to know how to handle it!”) Knowing I have him to keep me company and to motivate me when I need it makes the whole race seem less daunting. Also, he has all my medical details, so if something happens, I know he’s got me.

That said, if you don’t have a partner during the race, find a bus you’re comfortable with and hang out with them. I first did this when I ran Soweto half marathon and it was a lot of fun.

READ MORE: What You Should Eat And Drink During A Race

7 Tapering is no joke

The guys at Men’s Health wanted to organise a social soccer game two days before the race. Oh, I’m sorry, I can’t, I’m tapering. (Insert all the eye-roll emojis!) My partner tells me I have textbook tapering symptoms. I feel slow, my feet hurt, I’m worried I haven’t trained enough and that I’m losing my fitness, I’m irritable and I’m starting to feel flu-ish! I have to calm the anxiety by reminding myself these are classic taper-tantrums — and that I’m not alone. I have to remind myself that I’ve put in enough training (I ran a 46km training run a month ago — and I felt strong), cramming is dangerous and the most essential thing for me to do now is rest and fuel.

8 Carbo-load and hydrate two days before

That’s right: 48 hours of sweet potatoes, rice, gluten-free pasta. That’s basically what’s on my menu. And all the protein. I’ve been adding tuna to my daily lunch salads. This may make you feel like you’re gaining a little weight in the last tapering week, but your body is just storing and with that comes water storage. I keep reminding myself to drink more water, even if it’s the last thing I feel like. Extra water ‘weight’ on race day is super-beneficial.

But be careful of over-hydrating the night before because, if you’re like me, you’ll want to have about three ‘nervous wees’ while you’re waiting at the start. Rather make sure you take in water regularly during the race itself. Also it’s become a tradition that I have two glasses of red wine the night before. It helps calm the nerves and studies have proven that it actually helps women perform better the next day (the same study didn’t show any improvement for men though).

No matter how much anti-chafing roll-on you use or the fact that you wear the best running gear available (I‘m lucky I get sent tons of amazing gear to test for WH), you are still going to sting. You don’t feel it initially. In fact you won’t even know you’ve chafed until the hot water from your post-run shower trickles down your butt crack and you nearly jump into the glass door from the sudden raw burning pain.

I now have a scar about 3cm below the middle point between my breasts from running bra friction. If I’m running further than 30km I religiously apply anti-chafe under my arms, between my butt cheeks, around my groin, around my boobs… And If I’m running ultras, I have to make peace with the fact that I’ll still burn a little somwhere, no matter what precautions I take.

READ MORE: Print This: The Race Day Checklist That Covers EVERYTHING

10 Anything can happen on race day

No matter how hard you’ve worked, how well you’ve planned your nutrition, how you’ve followed the rules and “not tried anything new” on race day… Anything could happen. My biggest fear is all stomach related. I have a bit of a tricksy tum. I’m allergic to wheat and dairy and certain foods and stress send my stomach into overworking mode. So my biggest fear is to have an upset tum on race day. In my mind I’ve already plotted all the potential bathroom stops (garages, cafés).

Always pack emergency tissues and (gasp!) wet wipes in your running pouch, just in case. I have SO much empathy for the poor woman who was named the ‘Clifton Pooper’. Imagine being so desperate that you’re forced to drop your pants in a public space.

Looking for more running advice? We’ve got you covered with all these running tips.