6 Serious Mistakes You’re Probably Making During Sex
Um... Who knew such dangerous moves could happen during an average sex session?! Also, you're probably guilty of at least three of these mistakes... 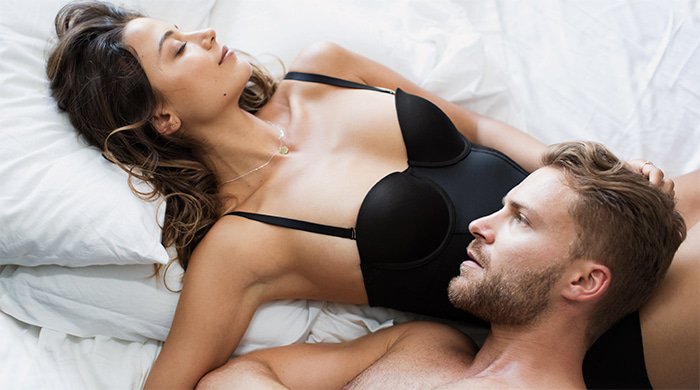 Read this before your next roll in the hay…

A dreamy date that leads to seriously steamy sex? You go, girl! But make sure that angel on your shoulder is cutting in at the right moments. To prove our point, here’s a little ditty about Jack and Diane…

Diane leans forward so Jack can glimpse her cleavage. “You want another?” Jack asks, noticing her nearly empty wine glass. (1) Diane drains her drink, then pulls Jack toward her, feeling his stubble against her neck. “Let’s go home,” she purrs. (2) Diane flings open the door of her flat. As she trails her hand down his chest and hooks her fingers on the waistband of his jeans, Jack dims the lights. (3) He rubs his hands over her curves and Diane moans. “I have a condom,” he breathes roughly, pulling one from the pocket of his jeans. (4) She eyes his erection. “First, this,” Diane says, sinking her knees into the soft carpet, adrenaline coursing through her veins. She wants this. She wants him. (5) Jack grunts, flipping her onto her back, licking her stomach. Diane writhes in pleasure. “I want you now…” He rolls the condom on and thrusts into her, going deep inside of her. He thrusts again as their eyes lock, her body tensing with anticipation for the orgasm she knows is about to flood through her. “That was amazing,” Jack pants, rolling off her and dropping the condom in the knot of sheets between them. (6) “When can we do that again?” she whispers. “Whenever you want…”

So, what went wrong in this scenario? Use the key to match the number with the mega sex mistake.

READ MORE: 5 Things You Should ALWAYS Do After Sex

1. Switch your order to water!

A Canadian study found that your likelihood of having unprotected sex rises five percent for every 0.1ml increase in blood alcohol level. That means after three drinks each, Jack and Diane are nearly 50 percent more likely to have unsafe sex.

2. She’s got to talk health history

According to a survey by adult store Adam & Eve, 25 percent of people don’t tell their partner they have an STD. No doubt it’s a pause button in the fun, but the convo doesn’t need to be lengthy: “I’m really excited, but before this goes any further, I need to know the last time you were tested for STDs. I was tested in September and the results were negative.”

READ MORE: 25 Sex Facts You Legitimately Need In Your Life

3. Do it with the lights on

That way she could do a quick visual analysis of his package: pimple-like bumps or a red, scaly rash can help signify an STD, which he could transmit even without having actual intercourse with her. (Though most STDs don’t have symptoms, just because someone looks fine doesn’t mean they’re clear #noglovenolove).

4. Pull protection from your own stash

Condoms kept in high, fluctuating temperatures like a wallet or pocket, are more prone to breakage. Rubbers also have expiration dates, so it’s safest to use one that you know is super fresh.

READ MORE: 7 Common Things You Should NEVER Use As Lube

5. Put the condom on before the BJ

STDs, such as herpes, gonorrhoea and syphilis, while low-risk, can be transferred from oral-genital contact.

It’s best to wrap used condoms in a tissue and chuck them in the bin. Aside from being a sticky mess, there’s a teeny, tiny, microscopic chance an STD can be caught from handling a post-coital cock sock. Plus, it’s just manners.

Think it’s just you doing all the fretting? Here are the 5 surprising things guys worry about most during sex. Plus: 5 things you should never do during sex!