You Won’t Believe How Good Our National Tug-Of-War Team Is
Walking into the tug-of-war training grounds in Somerset West is a little like accidentally stumbling into a parallel universe. 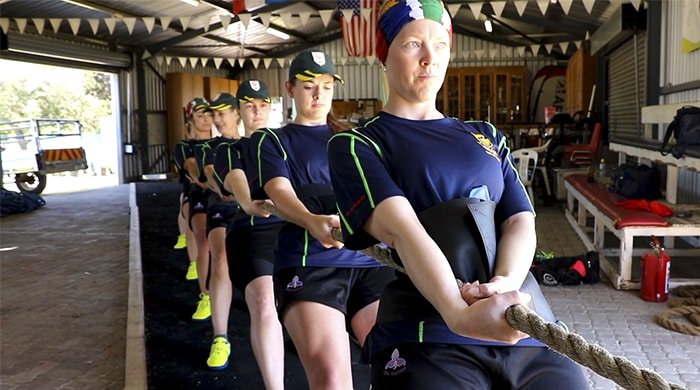 Yes, we have a tug-of-war team, and yes, we’re killing it.

Walking into the tug-of-war training grounds in Somerset West is a little like accidentally stumbling into a parallel universe. Tucked behind a grey corrugated iron building, a small group of people are assembled in a queue, lining up behind three large, heavy ropes, each attached to a rusty drum atop several weight plates. Pulling each of the ropes are women. And not butch, burly women, either: normal-sized, young, pretty women, almost all in their early 20’s or even teenagers. Many of them make up the national women’s tug-of-war (also called toutrek) team. “These are the endurance tests,” says Anton Gerber, the national coach for the women’s team. “They need to hold the rope at a percentage of their body weight and see how long they can hold it for.”

The Tug-Of-War Team Is Ranked Third In The World

It’s hard to imagine that this space, a hotchpotch of dirt-filled drums, mammoth tyres and ropes attached to an assortment of homemade devices constitute the training ground for a world-class team of athletes. “The whole world is doing it,” says Gerber. “There are 62 countries doing it. In Japan, you’ve got more than two thousand clubs just for toutrek. There’s more clubs there than what we’ve got people here doing tug-of-war.” The club in Somerset West is not the only one in the country. There are several throughout South Africa, including clubs in Mpumalanga and the North West.

READ MORE: Here Are The Ridiculous Disses This Sportswoman Has Had To Deal With

Internationally, the women’s team is ranked third in the world. Gerber says this makes them the highest-ranking women’s team in South Africa, above our rugby, hockey and cricket teams. Still, the team is self-funded and pays for everything themselves: from importing specialised shoes to raising money to go overseas to compete at an international level. Team captain Leonell ‘Lollie’ Steyn is a multiple bronze medallist in the sport and works as a secretary full-time. She trains after work from 5pm until 9pm in the evening. “Many people say ‘Tug-of-war, what is that? Is it actually a sport?’ People think it’s a boere sport,” she says. “No, it’s an actual sport; we get Protea clothes and go overseas. It’s actually scary.”

The Training Is Crazy

The team meet up every night in the build-up to a competition, and before that, up to thrice a week for two hours in the evening. Training drills vary from pulling ropes in pairs, to endurance pulls to pulling the rope, attached to a heavy drum, in reps.

Aside from that, each team member has their own training regimen. Steyn does spinning to build leg strength, something important in the sport. Since strength is important, she also does weight training. Jancke De Wet, also in the team, does CrossFit, weight training and cardio. The big target? Core. As soon as you pull the rope, you’re forced to lower your body for stability, meaning your midsection works overtime to get the rope over the line — four metres over the line, to be exact.

READ MORE: Why Are SA’s Sportswomen Not Getting The Recognition They Deserve?

The rules of the game vary from indoor to outdoor versions of the sport. Some rules are standard: no sitting on the ground, no arms on the rope and no gloves allowed. Right now, the team’s training for the Indoor World Championships in China next year. There’ll also be the World Outdoor Championships in Cape Town next year. If you’re keen to get involved, check out the website to find a club near you, and the Facebook page to find info on the next game.

Want more? Check out these sports you’ll find at the 2020 Olympics, and read about these women who changed the sporting game – literally.