The Easiest Way To Set A PB At Your Next Big Race
Your running performance — and ability to score a PB — isn't just about how many hours you put into training. There are other surprising factors at play... 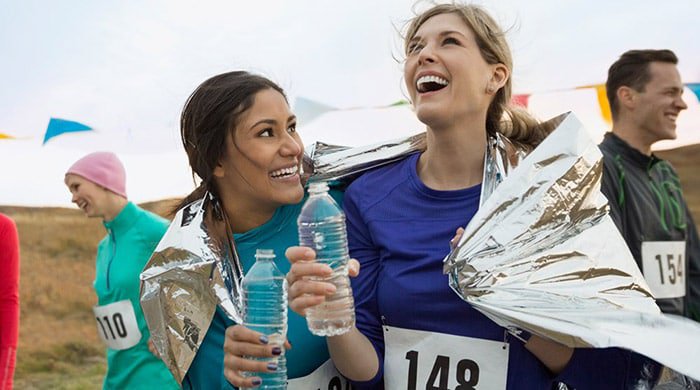 It almost sounds too good to be true.

Racing is not always about winning, but when it is, it really is. The good news? You can sleep your way to the top of the podium.

“A big reason people don’t score a PB at a big race is that their sleep was off mere nights before,” says Christopher Winter, author of The Sleep Solution, who studies the link between fitness and sleep. That rule is especially true for destination events, where you’re in a different time zone or an unfamiliar hotel. Planning your pre-race snooze plan may help lower anxiety — and, according to researchers in the UK, may even improve your running performance.

READ MORE: Become  A Faster Runner With This Explosive Workout

Unlike your iPhone, your body doesn’t auto-adjust. If you’re racing away from home, you have to tinker beforehand or you can count on a bad night before your big day. Two weeks pre-race, alter the lighting in your home to simulate when the sun goes down in your race location, says Winter. So, for example, if you’re doing a race in another time zone, check out their daylight patterns and emulate them. “Then go to bed and wake up when you will for your race,” says Winter.

READ MORE: Exactly How To Change Your Cardio Routine If You Want To Set A PB

Getting up early to run or ride in the dark before work can be an exercise in the art of suffering, but if you’re always hitting the gym after work, listen up: Your body “adapts” to perform at its peak during the time of day you regularly work out, according to a study in the Journal of Strength and Conditioning Research. If you’re primed to run fast at 7pm, for example, you’ll be ill-prepared to PB when the starting gun fires at 7am. At least a month leading up to the race, says Winter, train at race hour a minimum of twice a week. (If you’ll be racing in a different time zone, remember to factor that in too.)

READ MORE: Exactly What You Should Eat Before And After A Run

Forget counting sheep. Use those last few moments before falling asleep to get your head in the game — literally. At least a week before race day, lie in bed with your eyes closed and play a mental movie: See yourself feeling great as you maintain your goal pace, PB’ing at the finish line. It might sound far out, but it’s scientifically proven to boost athletic performance. One study found that people who visualised performing a strength exercise for 15 minutes a day for 12 weeks increased their strength by more than 13 percent even though they didn’t actually lift a weight.

Check out these 7 hilarious confessions only girls who run will understand! Bonus: This treadmill workout will help you on race day.

This article was originally featured on www.womenshealthmag.com