This Is Exactly How Your Period Affects Your Workout
When you’re moody and crampy, you may not feel motivated. But get off the couch, because your period affects your workout in some astonishing ways... 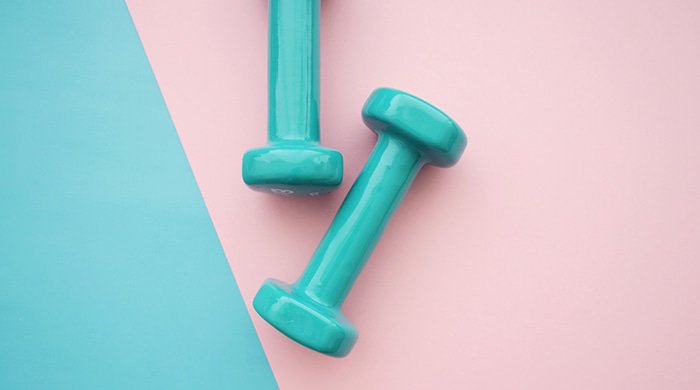 By Jayme Moye; Photography by Freepik

During your period, your body is more like a man’s…

When you’re moody and crampy, you may not feel motivated. But get off the couch, because – surprise – having your period can actually turbocharge your workout.

Call it the female advantage. At the same time in your cycle that you have cravings and cramps, hormonal changes can give you boosts in pain tolerance and muscle recovery that can pay off at the gym. In fact, at other points in your cycle (when you don’t have your period), exercise could feel more challenging. Learning how your hormonal shifts affect your body can help you understand why some days you feel like the leader of the pack in spin class and other days it’s as if you’re stuck in the mud. And that might encourage you to push harder when you’ve got the extra oomph and scale back (without guilt!) when you don’t.

READ MORE: What Your Period Blood Consistency Says About Your Health

How’s this for irony: when you have your period (and the week after), your body is more like a man’s. During this part of your cycle, your levels of the female hormones oestrogen and progesterone are at their lowest, making you a little more dude-like – at least metabolically, says Dr Stacy Sims, an exercise physiologist and leading researcher on the impact of menstruation on athletic performance. “It’s a subtle hormonal shift, but it’s enough that it could make you feel more powerful,” says Sims, who began her investigation out of personal curiosity (she suspected her hormones affected her performance in a triathlon).

READ MORE: How To Tell The Difference Between Period Blood And Spotting

Her research shows that during this low-hormone phase, women also recover faster and have a higher pain tolerance. Why? “A probable theory is that your body isn’t preoccupied with preparing for a possible pregnancy,” she says. “Your baseline is reset to a more relaxed mode, so these other systems operate optimally.” Granted, feeling crampy can make it tough to part with your hot water bottle. But once you’re at the gym, you might find you breeze through your routine. So challenge yourself with that advanced yoga class or increase the incline on the treadmill. Exercise can relieve the discomfort of cramps and an aching lower back, says physical therapist Dr Trina Rowe. It will also burn kilojoules, a bonus if you’re a hormonal chocolate fiend. 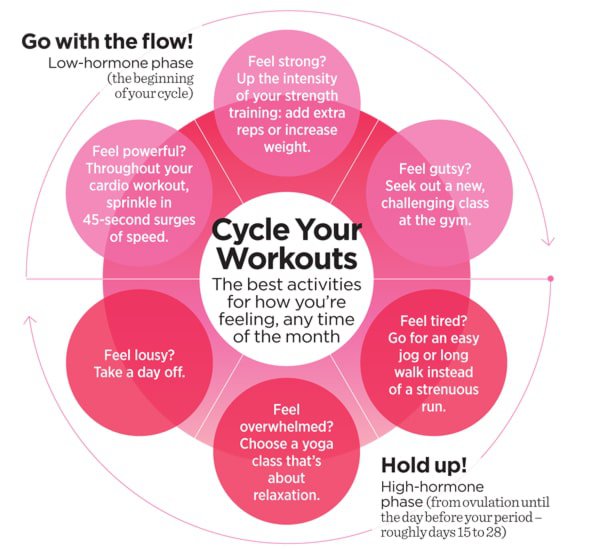 For roughly two weeks before your period, you’re in the high-hormone phase. At this point in your cycle, which starts when you ovulate and ends with the first day of your period, your oestrogen and progesterone levels peak. Yes, this is when you may find yourself crying during soppy ads and going ballistic when you break a nail (particularly on the days leading up to your period). But that’s not the only downside of your heightened hormones.

During this phase, says Sims, you’re less tolerant of heat, because elevated progesterone delays your sweat response, causing your body to take longer to expel excess warmth. You could also be sluggish: your metabolism shifts to use fat as its primary energy source over carbs, and those fatty acids are slower to release as energy; with fewer carbs available, you have less fuel for power. You might feel bloated, as increased oestrogen causes your kidneys to redistribute water flow. “These physical shifts are a direct result of the process the body undergoes to prepare itself to carry a fertilised egg and sustain a pregnancy,” says Sims. “During this time, that’s your body’s main priority. So it changes metabolic processes to support that.” Cranky, tired and bloated. You may as well take a sabbatical from gym, right? Not so fast.

READ MORE: Here’s Why Your Workout Might Be Making You Bloated

Research shows these effects aren’t major enough to sap you of strength or power. You won’t feel like cycling fast or swinging heavy kettlebells, but your body is capable of handling its usual workload. And you certainly shouldn’t let your cycle stop you from participating in an event, says obstetric gynaecologist Dr Nina Stachenfeld. “If you’re training for a race, don’t worry about your cycle phase,” she says. “Hormonal fluctuations don’t impact endurance.” So when your hormones are at their peak, your performance doesn’t have to take a hit.

That said, if you’re really feeling lousy, this is the time to give yourself a break without feeling like a slacker. Go for an easy run instead of doing intervals. Skip tricky yoga poses and opt for relaxing ones. In fact, take a whole day off. German researchers studied women who lifted weights every third day through both phases of their cycle and compared them with women who lifted just once a week during the high-hormone phase and every other day during the low phase. The women in the second group – the ones who backed off when their hormones were high and made up for it when they were low – experienced an increase in strength of 32.6 percent, compared with their counterparts’ 13 percent gain. That’s why it’s important to think of your workout plan as a monthly cycle. Push hard when you’re feeling good and back off when you’re not.

PMS threatening to get the better of you? Instead of curling up in a ball, try a workout – and be amazed at the relief it can bring!