17 Home Exercise Moves You Can Do With A 5L Water Bottle
No access to a gym? Got a stockpile of water? Just found out Day Zero has been pushed out again? Put that 5L water bottle to use with these moves. 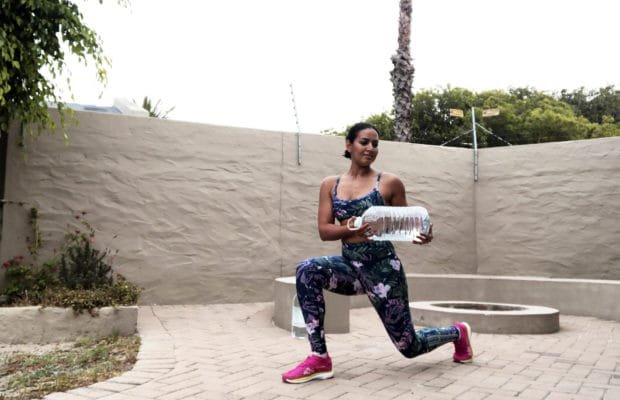 I’m not generally one to give in to mass panic. During the bird flu epidemic of 2017, I brazenly made frittata. As the Mother City braced for The Biggest Storm In Thirty Years, I was sipping chilled white wine at the Village Idiot on Loop, waiting for the maelstrom that never came. And just recently I ate a sausage. It was processed. I know. Life…own hands.

100 Bottles Of Water In A Trolley…

Did I mention that I was born in Cape Town? So panic is in my blood. Must be. It’s just buried deep, along with the fear-of-using-indicators gene and the willingness to pay twice the price for anything labelled “artisanal”. I know this, because earlier this year, it briefly surfaced. I first showed symptoms as I was leaving Pick n Pay one Saturday afternoon. A fellow shopper walked past with a trolley piled high with five-litre water bottles. I shot him a pitying  glance. Then I saw people queueing outside an Oasis water shop with containers so big I could probably have squeezed into them myself, had I been schooled somewhere like Russia or China. Don’t get me wrong, I pitied those fools as well, but this time it was tinged with mild concern. I bought one 5l bottle of water and put it in the fridge.

READ MORE: 5 Kettlebell Mistakes That Are Screwing With Your Results

Look, I’m no drought-denialist. At this point, I was already doing my bit to save water – rain tanks, buckets, dead garden, swampy pool, grey water in the toilets, all the usual. But as my family WhatsApp group shared link after doom-filled link and talk radio lined up one drought expert after the next to discuss everything from shower-heads to geology, even unflappable me began to flap. (More guinea fowl than Game of Thrones dragon, but a flappetjie nonetheless.) And eventually my Capetonian heritage could stay silent no longer. The fever hit. I panic-bought water. Online – we’re still civilised over here. And now, here I am, maneuvering my little hatchback into a garage stacked high with five-litre water bottles, prepped for a Day Zero that’s been pushed out to 2019.

READ MORE: Sculpt Your Whole Body With This One, Simple Piece Of Equipment

The good thing to come out of this drought – there’s always something – is that us Capetonians are going to be strong AF. Bring on Super Rugby 2019, baby! Water is heavy. A five-litre weighs about five kilos – that’s a decent-sized kettlebell. You may not be drinking out of your water bottles anytime this year, but here are 17 exercise moves you can do with them as your weights.