10 Symptoms Of Stopping Birth Control Pills That You Might Experience, According to Experts
The Pill is like the Swiss Army knife of birth control: It does so much more than you'd think. Oral hormonal contraceptives prevent unplanned pregnancy, help regulate your cycle, tamp down menstrual cramps, and can clear up your skin. These are just some of the reasons people start taking hormonal birth control. 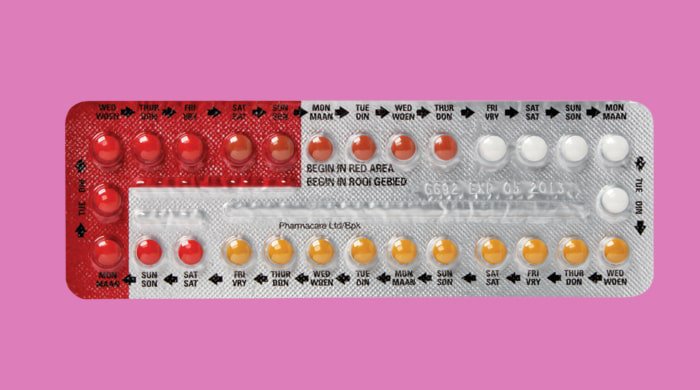 The Pill is like the Swiss Army knife of birth control: It does so much more than you’d think. Oral hormonal contraceptives prevent unplanned pregnancy, help regulate your cycle, tamp down menstrual cramps, and can clear up your skin. These are just some of the reasons people start taking hormonal birth control.

But what should you expect if you go off of it, and are there side effects of stopping birth control? And why would anyone want to go off the Pill the first place (besides wanting to make a baby, of course)?

“The decision to stop taking birth control is a personal one,” says Dr Nicole Noyes, chief of reproductive endocrinology and infertility at Northwell Health. For example, “some people stop taking the pill if they learn they’re at an increased risk for rare, but serious complications related to the Pill, such as blood clots,” she says. Rarely, a cancer diagnosis would be a reason to stop, because some cancers are sensitive to hormones.

Someone might also switch to non-hormonal birth control if they have bad symptoms on hormonal contraceptives, such as mood changes. And some people simply don’t like the idea of “fake” hormones in their body and want to try something different.

If you do want to stop taking the Pill, there’s no best way to do that. You can just go ahead and stop in the middle of a pack, wait until you finish — whatever you want (medically, there’s no difference). The only reason you may want to finish the pack is because then you have a better idea of when you’ll get your period moving forward, experts point out.

If you want to switch to non-hormonal birth control (and, again, that’s entirely your choice), Dr Alison Edelman, an ob-gyn and director of the Oregon Family Planning Fellowship, suggests a copper IUD. It’s even better at preventing pregnancy than birth control pills, she says. But, some people do have pretty serious cramping and bleeding on their periods when they have a copper IUD, so that’s also definitely something to consider.

Either way, most of them are likely to pass once your body adjusts. And if you’re wondering how long its take for your body to go back to normal after stopping birth control? Your period typically comes back in three months, and side effects should peace out then as well, if not sooner, per the Mayo Clinic.

No matter your reason for quitting hormonal birth control, there are a few things you might expect to happen. Just remember, everyone reacts differently, so you probably won’t feel all of the symptoms experienced by the experts and women below. There’s a chance you won’t feel any of them at all—but they’re still great to know about in advance, just in case.

When you’re on the Pill, your testosterone levels dip, which can lead to fewer breakouts, says Dr Alyssa Dweck, an ob-gyn and co-author of V Is for Vagina. But when you stop taking it, those levels go back up again, so your acne could get worse, she explains.

When Melissa F. from Louisiana lost her insurance and had to go off the Pill, she started seeing acne all over her body, she tells Women’s Health. She had been on the Pill for three years.

But there’s good news here: For most people, the breakouts won’t last. Our bodies don’t like change, Dr Edelman says. For however many years you were taking the Pill, your body got used to a continuous hormone. Now, it has to readjust to the way things were before, and during the first few months your body might freak out a bit. Acne can be a part of that.

If you didn’t have any problems with acne before you started taking the Pill, the extra bumps on your face (and anywhere else) will probably go away after those few months. But, some people originally start taking the Pill because it can help clear up acne. If that’s you, then Dr Edelman says you’ll probably start having the same skin troubles as you did before you started the Pill once you go off it.

“My sex drive kind of increased and decreased when it wanted to,” Melissa says about going off the pill. “It’s like it was all out of balance.”

Some women taking hormonal birth control may experience a lower sex drive and more discomfort during sex, according to a study published in the Journal of Sexual Medicine, thanks to the dip in testosterone levels. As a result, some women report having a higher sex drive when they go off the pill.

4. Your period will change.

Not to state the obvious, but birth control pills have a big impact on your period. So quitting birth control does, too. “I went off the Pill about six months ago, because my husband and I want to start a family,” Kaely D. from California says. “But I wish I’d gone off years ago. I love how I feel. My periods are a little irregular and unpredictable, but that’s not a deal-breaker for me.”

Irregular periods were a slightly bigger deal for Kathy H. from North Carolina, though. She took the Pill for nine years, but went off it when she wanted to start a family. Since the Pill regulates your hormones, your period will go back to the way it was once you stop taking it, says Dr Mary Jane Minkin, clinical professor of obstetrics and gynaecology at Yale School of Medicine. So if yours didn’t always come on time every month, you should expect to have that happen again.

And, again, it’ll take some time for your body to regulate, Dr Edelman says. It can take months for your period to get back to what it was before you started the Pill. And it might never the same — though that’s not the Pill’s fault. “Many women forget that our periods change throughout our lives,” she says.

Just because your period was always regular before you started birth control doesn’t mean it’ll be regular afterwards. Periods sometimes naturally change, and your body’s “normal” period when you stop taking the Pill might be very different from what it was before you began taking it.

PMS is a pretty normal thing for women to feel during their periods, but for some it’s very intense. Connor D. from Virginia has a severe form of PMS called premenstrual dysphoric disorder (PMDD), a condition that causes depression, irritability, and tension before menstruation.

For five years, she took hormonal birth control pills to manage the symptoms, but then Connor decided to stop. “I was in college and didn’t trust myself to remember to take it every day when my life had little to no routine,” she says. “I also started to experience break-through bleeding in the middle of my cycle.”

Unfortunately, quitting the Pill made her PMDD symptoms way worse. “My PMDD came back full force: extreme emotional changes, unexplained sadness, anger, anxiety. I only had one good week per month.”

Again, experts note that any period issues you had before you started the Pill can, unfortunately, come back full force once you’ve quit.

READ MORE: 9 Side Effects Of Hormonal Birth Control Every Woman Should Know

Not everyone loses weight when they stop taking the Pill. Some gain a few kilos. Research shows that a third of women who stop taking oral contraception lose weight, a third gain weight, and a third stay exactly the same, says Dr Dweck.

If the scale goes down, it’s most likely water weight, since being on the Pill can cause water retention. But remember: Losing water weight isn’t the same as losing fat, so any lost pounds likely won’t last.

Headaches aren’t super common on birth control, but because the Pill regulates your natural hormones and causes a steep drop in estrogen, some people do get headaches, especially those who are prone to migraines. For some migraine sufferers, oral contraceptives can be a trigger, according to the National Headache Foundation.

Kathy felt a change in the frequency of her headaches. “I did notice that I mentally and physically felt better,” she says. “I didn’t feel as sluggish, and I had a lot less headaches than I did while taking the Pill.”

READ MORE: “My Birth Control Gave Me A Blood Clot” — Here’s What You Need To Know

Here’s something you probably didn’t know about your hair: Every follicle is on its own little growth cycle, Dr Edelman says. But, sometimes, when your hormones change — because you’re pregnant or because you’re taking or quitting the consistent hormones in birth control — your hair all connects to one cycle. And when that happens, large clumps can all fall out at once. It’s nothing to worry about for your health, Dr Edelman says. But it can be scary. Luckily, it’s pretty rare, so most people don’t have to worry about losing hair when they go off the Pill.

However, other people have a different kind of hair problem. Some women start taking birth control to help with unwanted hair growth on their chins and backs. Hair in these areas is called hirsutism, Dr Dara Matseoane-Peterssen, chief of the division of General Obstetrics and Gynecology at New York-Presbyterian/The Allen Hospital. The Pill can help slow the growth of this hair because it tampers natural testosterone levels.

If you had problems with unwanted hair before you started birth control, you’ll likely have unwanted hair again after stopping it.

READ MORE: 9 Struggles All Women Who Take The Pill Can Relate To

For some people, taking birth control can make sex a bit uncomfortable. “Some people report pain or discomfort during sex, and luckily this should go away once someone stops taking the Pill if it was truly the culprit,” Dr Noyes says.

Typically, the discomfort happens because hormonal birth control can cause vaginal dryness, Dr Edelman says. While lube can help with that, it’s sometimes not enough. Connor, for one, was happy that she no longer needed to use lube during sex once she quit the Pill.

If you struggle with uncomfortable sex because of the Pill, you might want to explore other birth control options with your doc to make sex feel good again. Just remember to be prepared. “Unless pregnancy is a goal, it’s important to talk to a doctor about other methods of birth control if you plan on going off,” Dr Noyes says.