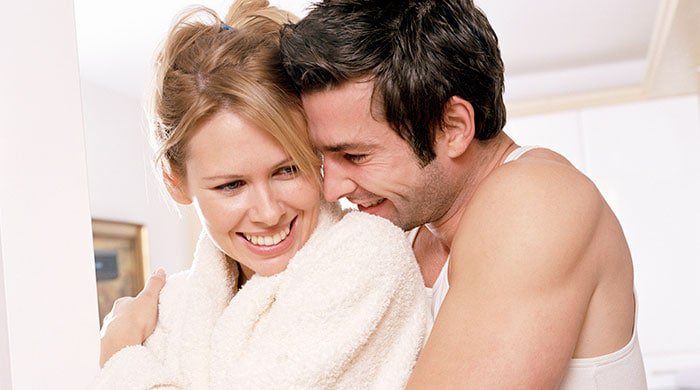 Dude, we just woke up!

Finally science has the answer to this age-old question – and an explanation to why biology stops him from springing an erection whenever, wherever the rest of the day!

It’s 4am and you’ve just been woken up by a rock-hard boner poking you in the back. Seriously, dude? This phenomenon, also known as morning wood, is so common that doctors actually have a medical name for it: nocturnal penile tumescence (NPT).

While you might notice this medical miracle more frequently in the wee hours, these boners can occur anywhere from three to five times throughout the night. “It’s typical of adolescents and young men, due to their peak levels of hormones, which correlate to the frequency of their erections and their need for release,” says sexologist Dr Gloria Brame, author of Sex for Grown-Ups. “Naturally, as men age, this occurrence wanes as their testosterone levels and sexual function decline.”

So yeah, backstabbing boners won’t stalk you every morning for the rest of your life. But for now, you’re probably wondering what the hell causes them. Though there are plenty of old wives’ tales suggesting guys’ a.m. erections are caused by sexy dreams, experts aren’t totally convinced.

“Morning wood has nothing to do with dreams during the night, as spontaneous erections have also been observed in male fetuses in the womb,” says clinical sexologist and relationship coach Dr Uta Demontis.

With those ruled out, Demontis says that it’s possible that the male body spontaneously produces boners in the middle of the night to oxygenate his junk with some fresh blood flow. Kay.

Other experts believe that because all humans are really out of it during REM sleep, the penis is finally free to have a life of its own and chooses to be hard. Chooses? Woof. Maybe we’re giving the penis a little too much credit here.

“I mainly attribute morning wood to hormonal spikes and assume that it’s those spikes that bring on the dreams or cause men to suddenly be aware that their penis is sensitive during sleep,” says Brame.

Read More: 10 Things You Should Never Do To His Crown Jewels

So why don’t guys’ peens pop up in the middle of the day? “The male brain emits an anti-erection chemical during their waking hours that helps keep them from springing an erection at socially inappropriate times,” says Brame.

“During sleep this inhibiting factor goes away, allowing erections to come and go freely,” says Brame. “Age, libido, cardio fitness, blood pressure and dozens of other variables mean that any two men could be different.”

The point of the matter is that early morning arousal is totally natural. “So if or when a man wakes up without an erection, it could be a signal that there’s an underlying problem that’s preventing his self-regulating sexual health system from functioning.” In other words, count your boners, ladies and gents. Tomorrow’s wood is not a given!

Looking for more information on his junk? These are the four most dangerous positions for his penis (so proceed with caution) and here are seven common reasons why he just can’t get it up.