“I Worked Out In Reusable Period Panties — Here’s What Happened”
I tested period-proof underwear in a sweaty yoga class with a new IUD! Here's what it's like to work out in re-usable panties — tampon-free 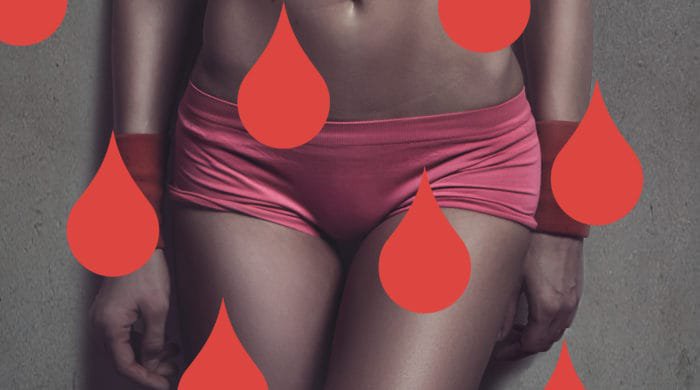 By Philippa Crooks; Photography by Pexels

What are they? And how do they work?

The active briefs from ModiBodi are specifically designed for working out on your period. These little black panties claim to absorb sweat and one tampon’s worth of blood. Unlike ordinary pads, they can be washed and reused. All of this definitely made them worth putting to the test…

Slipping the underwear on for the first time, I was skeptical. They felt a little too tight despite being my usual size, and the fabric felt flimsy and synthetic (itch alert!). Being on your period is bad enough — you don’t want to be stuck in uncomfortable panties too.

Luckily for me, the panties are actually made from al naturale Merino wool, which Modibodi claims to be “the most superior, all natural, performance fabric available on the market.” And the snug fit turned out to be advantageous — the briefs remained obediently in place while I exercised. Win!

The Test Run: No Tampons Allowed

My skepticism extended beyond the fit and fabric. I wasn’t ready to trust these foreign undergarments to take on the full wrath of Aunt Flo. So, I decided to do a test run.

I have recently had my copper-T changed, and before the strings are trimmed during the first few weeks you’re not allowed to use tampons or menstrual cups. Also, while the copper-T is settling in, you get a bit of spotting — especially when you exercise. This was perfect timing to put these panties to the test.

I took them for a spin in a sweaty Bikram class, expecting some light bleeding. They performed better than I expected, leaving no trace of blood on the surface gusset layer. They were comfortable, breathable and allowed for movement without slipping out of place.

READ MORE: What Every Woman Should Know About Using Scented Tampons And Pads

After the success of the test run, it was time to try out the ModiBodis on a real period day. Since I’ve had a copper-T my periods have been really heavy, so I was mentally prepared for the worst.

Imagining the Battle of Blood River in my pants, I strategically chose a spot in the back of the yoga class with direct access to the exit. I even wore my black leggings, so that spillage wouldn’t be too noticeable.

As it turned out, I was just being “extra” and my escape strategy was unneeded. After an hour of sweaty sun salutes, my brookies remained fresh as can be! They didn’t feel soggy, and most importantly: no leakage!

Compared to pads, the Modibodis win outright. They’re not sticky or clammy, and don’t shift around. Being re-usable, they’re eco-friendly (unlike disposable tampons and pads which clog up landfills). They are easy to wash. A rinse in the gym shower does the trick, and they’re washing-machine-friendly. They dry fairly quickly too. I think they would be a good back-up to wear with a menstrual cup, if you’re paranoid about leaks like me.

There was one downfall, however. After a few washes in my machine, little holes started forming in the fabric along the waistband. Note to the manufacturer: construction quality could be improved.

Overall, though, I’d give them a thumbs up.

Looking for more? Here are some interesting facts that might change your mind about menstrual cups. Plus: What every woman needs to know about toxic shock syndrome.